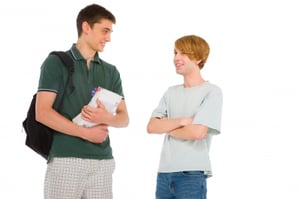 (ADHD) is a brain-based disorder that affects a person’s ability to have self control to sit still and pay attention. ADHD is commonly first noticed in children as they exhibit symptoms that obstruct them from getting the most out of their academics. ADHD symptoms wreak havoc not only in school, but at home and socially as well. To increase awareness as to what ADHD is and how it works, here are seven facts about ADHD.

1. ADHD can be diagnosed in both adults and children. Children are typically diagnosed around the age of seven, but most children are diagnosed by their teen years. However, there are many people who are not diagnosed well into adulthood.

3. Symptoms present differently in boys and girls. Although both genders may be affected by ADHD, the signs are different in boys than they are in girls. Boys have a tendency to act impulsively, talk excessively, are unable to sit still, and may even act aggressively. Girls, on the other hand, typically act more withdrawn. Signs include low self esteem, anxiety, academic difficulty, and inattentive behavior.

5. People with ADHD often experience emotional turmoil. For example, a child may act out aggressively because they are not able to control their emotions. Temper tantrums are not uncommon in young children. In adults, the emotional turmoil may be exhibited through depression, mood swings, and easy frustration.

6. Self-centered behavior is common with ADHD. Because of this, they are not able to access other people’s needs or desires, making interaction difficult. One sign of this is interrupting during a conversation or butting in on conversations they were not a part of. Another sign of self-centered behavior is not being able to wait for their turn. This can be particularly disruptive in the classroom.

7. Someone with ADHD has many unfinished projects. ADHD does not mean someone does not have interests. In fact, there may be many interests. However, the person with ADHD has more difficulty finishing projects once they have been started. Their attention is caught by something else during the process of doing a task, so they abandon the task to pursue the other.

If you think you or your child is suffering from ADHD, schedule a free consultation to discuss brain mapping. This is a process where, through EEG technology, we are able to pinpoint where the brain is having issues, giving us the tools to correct them with neurofeedback.

Image courtesy of Ambro at FreeDigitalPhotos.net