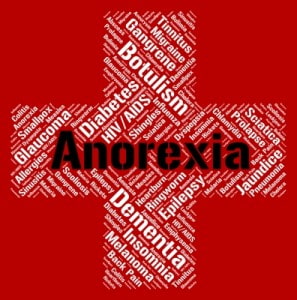 Anorexia nervosa is an eating disorder characterized by self imposed starvation and unhealthy, excessive weight loss. Anorexia is considered extremely dangerous, as it is a life-threatening disorder.

Between 5%-20% of those struggling with anorexia will die as a result of starvation, establishing it as one of the highest death rates related to mental health conditions. In fact, anorexia is the most common cause of death of women ages 15-24.

Anorexia affects many people across the board, however it is most commonly seen beginning in teenage years. An estimated 90%-95% of anorexia sufferers are women, however men are also affected. Anorexia is the result of a greater underlying issue linked with additional mental health disorders and concerns, such as depression, anxiety, and OCD.

Between 5%-20% of those struggling with anorexia will die as a result of starvation, establishing it as one of the highest death rates related to mental health conditions.

Symptoms of anorexia begin with a person having intense fear of gaining weight, even if the person is underweight, due to distorted body image.

Social situations that involve eating become a great struggle, as those suffering will often try to hide how little they have been eating, sometimes avoiding social situations all together for fear of being discovered. As the person becomes isolated, symptoms of depression worsen, which continues to impact the behaviors of anorexia.

Excessive exercise is also associated with anorexia, as a person tries to offset their caloric intake, despite how little they eat on a daily basis. Starvation gives the sufferer a false sense of power and control over their lives, as often they measure self worth based on physical appearance.

Is your loved one suffering from anorexia?

Do you fear someone you know may be suffering from anorexia? Review the following questions. If you answer yes to any of these questions, schedule a free consultation with Dr. Ross to evaluate the next steps.

Anorexia is a serious, often life-threatening mental health disorder, and should be treated with the utmost urgency.

Neurofeedback is a method of retraining the brain to function healthily and calmly without the use of additional medications. Finding the root of the problem within the brain will help ease the compulsion to starve oneself, as the problem more than likely stems from another brain-based issue such as depression.

Neurofeedback professionals are able to identify where in the brain the issue has begun, and neurofeedback sessions correct the areas in which the brain is having trouble functioning normally.

Using neurofeedback in combination with therapy, nutrition coaching, and other forms of wellness treatments can help reverse the damage caused by anorexia.

Jennifer* started to have an eating problem at about age nine. By the time I met her, she was seriously underweight. She had had several hospitalizations with severe medical problems including those affecting her heart.

From the other kids in the hospital, she learned some of the “tricks” of anorexia such as “agitating”, that is, keeping herself in constant motion to expend calories.

She insisted this was out of her control and in fact, she denied engaging in any of these behaviors at all.

When she first came to see me, I did a qEEG (quantitative EEG) brain map, as I always do prior to treatment. After this meeting, she became so seriously ill that she was hospitalized for an extended period of time. Nine months later, her parents brought her back for treatment.

Larger slow brain waves are an indication of reduced brain function, especially in the frontal lobes. This is the area where judgment, restraint, control of impulses, and cause and effect thinking reside. Her brain had lost ground as a result of nine months of malnutrition, of starvation.

She participated in neurofeedback sessions and I worked with her parents regarding coping with their daughter’s dire situation and the extreme anxiety this was causing them.

Faced with her disorder that brought her close to death multiple times, the parents nonetheless needed to learn to ignore her anorexic and bulemorexic behaviors including agitating and vomiting, the very behaviors that were threatening her life. Ignoring meant she was no longer getting attention for engaging in these types of behaviors and her parents soon learned to do this.

Reward, especially in the form of attention, is powerful when it comes to supporting behavior, even very negative behaviors and negative attention.

After a period of neurofeedback sessions and many therapy sessions, in which she entirely disavowed any awareness or responsibility for her condition, she said, “ I know, I decided to do this.”

This is precisely what she did. She cooperated with her treatment with her physician, she stopped her bulemorexic behaviors, and within a few months returned to school and to a normal early adolescent life.

Improving the function of her frontal lobes using neurofeedback was a crucial piece of the puzzle for Jennifer.

Commonly, I have seen people make changes in their behavior in some of the most dire situations. These choices are life changing and in many cases, such as Jennifer’s, literally saved lives.