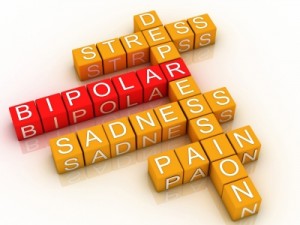 Bipolar disorder is a mood disorder that affects about 3% of the population. Identified by episodes of unusually intense depressive moods countered by extremely elevated, amplified moods at equal intensity, bipolar disorder has one of the highest risks for suicide. Although the cause of bipolar disorder has not been completely identified, most doctors agree that bipolar likely stems from genetics in combination with environmental factors and/or is triggered by traumatic life events or experiences. Some people with bipolar begin experiencing symptoms in their childhood years, but most often, symptoms of bipolar appear during the late teen years, as at least half of bipolar cases begin before the age of 25.

A person suffering bipolar experiences drastic mood swings, both of which can be dangerous to the person. During episode of mania, or high moods, a person experiences a powerful good mood and high energy levels, making them feel extremely elated, excited, and invincible. A person experiences racing thoughts and becomes overconfident in their personal abilities, which leads to poor judgment and potential danger. Other symptoms of mania include restlessness, irritability, erratic behavior including fast-talking, inability to concentrate, little desire for sleep, spending money recklessly, alcohol/drug abuse, aggressive behavior, high sex drive, and denial of such behavior.

Severity of the manic state varies case to case, and some people will experience varied symptoms. Hypomania is a more mild form of mania that people with bipolar may experience which often involves the person being more productive than usual. However if hypomania is left untreated, it can progress into severe mania or it can suddenly switch to a depressive episode.

When a person is experiencing a depressive episode, many of the symptoms of major depression begin to appear including sadness, anxiety, feelings of worthlessness, guilt, helplessness, lack of energy, lack of interest in activities once loved, changes in appetite, changes in sleep patterns, and thoughts of death and/or suicide. Depressive episodes are diagnosed if at least five symptoms are recognized and exist for a large portion of the person’s day almost every day for at least two weeks. People are more likely to seek treatment during the depressive phase, as it is easier to recognize for the person experiencing the symptoms. However, both phases can be very destructive.

If either episodes of bipolar go untreated, the episodes can worsen. Substance abuse is commonly found in people with bipolar, but the connection is unclear. Substance abuse could easily be a result of impulsive behavior due to mania and/or to numb or escape feelings of depression. Genetic and biological links are possible as well. Those suffering from bipolar should stay clear of intoxicating substances to be safe.

Neurofeedback can benefit those suffering from bipolar, as neurofeedback helps retrain the brain to have more emotional control, contributing to better, more stable moods, thereby lessening feelings of depression and anxiety. Those diagnosed with bipolar often have coexisting mental health issues including anxiety disorders, post-traumatic stress disorder (PTSD), and even ADHD, all of which neurofeedback is able to help correct as well. Neurofeedback has been known to reduce necessity for various medications, although this result is not guaranteed, as each case is different. The brain begins to function more efficiently over time and the person with bipolar is able to live life more normally.

Bipolar Disorder Not Otherwise Specified (BPNOS) – The symptoms of bipolar exist, but no pattern has been identified to qualify diagnosis for bipolar 1 or 2. However, the symptoms are unusual and severe enough to seek treatment.

Cyclothymia Disorder – The symptoms of bipolar are milder than other forms of bipolar, and do not meet any of the standards for a diagnosis of bipolar 1 or 2. Hypomania episodes have occurred with mild depression for a minimum of two years and occur at least half of the time without disappearing for at least more than two months, causing distress in every day life.

Rapid-Cycling Bipolar Disorder – Rapid cycling defines when a person has four or more alternating episodes of mania, hypomania, depression, or mixed states within one year.

Additional notable features of bipolar include: